Ok, you can’t say I haven’t warned you now!

You know I was just thinking a couple of days ago it had been a while since I had a wobble, bloody jinxed myself haven’t I!

It started on Thursday night, I was sitting on the sofa and whilst fidgeting I felt a little lump on my neck.  I wasn’t in a panic, as I am finding out we all have lumps and bumps all over a body, bloody hell I have enough on my “mummy tummy” even after losing 3 stone!

I went off to the land of zzzzzzzz and woke up drenched from a night sweat.  Not sure if I have mentioned them before but I have been having night sweats since Jan.  Way before Lenny was found, I’d gone to the docs and demanded bloods tests but nothing came back conclusive.

So Friday morning and the night sweat plus lump on neck together resulted in me going from “ok” to the biggest bast$ard of a wobble I have had in months.  I was in tears, floods of tears.  It was 6am and I was downstairs alone with my old enemy google! WTF was I doing???!!! 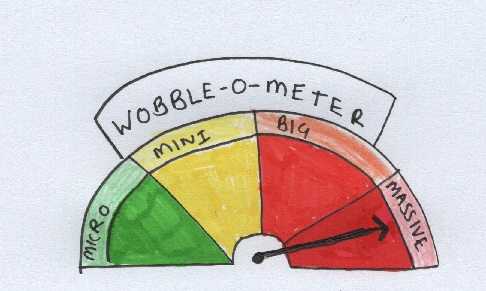 All I could think about was “have I got ANOTHER big C to deal with now??!”  I started to feel so angry.  Angry like I was when I found Lenny…. “Why me?, is someone out there just sending Lenny and his army troops out to get me?”

Shit, hubby was gonna be down any sec to go to work. Now anger turned into guilt.  The last thing I wanted was for him to see me like this.  His job is full on and I didn’t want him to worry about the state I was in.

Reluctantly, I decided to be honest and took myself back upstairs.  He was still in bed, but awake.  I couldn’t hold back the tears.

“Why don’t you get to the doctors this morning”?

The last time he said this was the day I found Lenny.

He was right, I need answers to this, I know I won’t get answers today but I knew sat on my ar$e crying wasn’t going to achieve anything.  Right then all I could do was weep.

Then in walked little man, he knew something was wrong.

“Mummy feels sad today” I said.  I felt so guilty for the tears, the last thing I wanted was to make him feel sad.

He shook his head, you could tell he was concerned as he handed me his bear to cuddle.

Usually he is full of beans, but on Friday he knew, he knew something was wrong … kids are so tuned in…scarily so bloody tuned in.

We decided that is what I would do.  I would call the GP and I would also make an appointment to see the Prof.  I need to go at this at all angles, I need to rule this shit out as quickly as possible.

We are supposed to be going away on Monday for a night, just hubby and I to get away from everything. This can’t spoil it.  I won’t let it.  I need the night away so much, and so does hubby.

I also got myself wound up as I was supposed to have a call at 9am with my new business partner.  I know, I know, I am off sick but I have been doing some behind the scenes work to help my brain again. How was I going to get to the GP and be on the call?  I decided I needed my right hand lady to step in and rescue me so sent her a “favour text.”  I really hoped she’d get it, I didn’t want to land her in it.

At 8:30 I called the docs, 4th in the queue, 4th in the bloody queue.  I rang on the dot, I have never been 4th in the queue – they best have loads of emergency appointments otherwise I was going to have to stalk them until I saw a GP.  I’d handcuff myself to the bloody reception desk!!

“Do you believe it is an emergency?” I get asked…..

Ffs, would I really be phoning and asking for an emergency appointment for nothing… I took a deep breath and answered very politely!

Thank fu$k for that! Already I was starting to feel better, more in control.

I gave my right hand lady a call, I was all geared up for doing the 9am call.  Well I thought I was until she asked how I was and I just burst into tears.

We are so close, I just couldn’t lie to her so I explained the situation.  We made a deal, she would do the call if I called my mum.

No one understands me more than my mum, she just knows what to say.  I had a cry.   A big cry and I can see myself starting to feel stronger.  Even the strongest of us cry, I know crying is not a weakness and for me it’s about getting it all out.

Next I called the Prof’s secretary and explain the situation.  I also explained we are supposed to be going away on Monday and she managed to squeeze me in first thing.  The wobble is moving down the wobble-o-meter, all I needed to do now was have a plan of attack at the GP.

As my old dad said, failing to plan is planning to fail so decided to make some notes.  There is no way I am coming out of that GP without being referred, no bloody way!

I get called in, it’s a GP I hadn’t met before, he looked like a trainee but I wasn’t going to hold it against him. I went through my notes…. He started looking at my blood history.

I could tell he isn’t “comfortable” with the situation.  He tried to “fob me off” with an ultrasound scan but I wasn’t buying it and he knew it.  I wasn’t rude but I wasn’t taking any shit that day.  Enough is enough, I needed to find out what the fu$k this is so I can move on with my life.  I’ve got too much to do to have this “niggle” in the back of my head and I know I am not being paranoid.

So he agreed to refer me on the 2 week “urgent” NHS route, I walked out like a weight has been lifted.  I have a plan now and there isn’t anything else I can do about it.  I will see what the Prof has to say on Monday.

It’s amazing how only a few hours ago I was in such a state and now I felt so much stronger and ready to tackle the world.

That evening I take the little man to his first school disco.  I walk in so proud, probably freaking out half the parents and kids with yet another hairstyle but tonight I don’t give a crap!

I found out later on Friday afternoon that one of my colleagues in Oz had lost his battle.   I had never met him but he was an amazing character. He was my age, diagnosed with stage 4 bowel cancer a couple of years ago.  He fought and fought to the very end, although I never meet him, hearing his story has given me so much inspiration.  It’s stories like this that make your own problems seem so immaterial.

So on Friday night whilst eating my fish and chips with my can of “Shandy Bass” – my version of Fosters (sorry but I don’t do lager!) I raised a glass to Rob Dowling.  A true inspiration, who will never be forgotten.